2018 Angels in Review: The Relief Pitchers

The Angels’ bullpen was quite good in 2017. Relying on several unexpected breakout performances, the group ranked 11th in baseball in earned run average, fifth in strikeout–minus–walk rate, and fifth in Wins Above Replacement. The team entered 2018 with a similarly unheralded assortment of relief pitchers, but the results were considerably worse.

In 2018, Angels relievers placed 13th in ERA, 19th in strikeout–minus–walk rate, and 20th in WAR. Despite the underwhelming overall numbers, however, there were a few players who put together impressive seasons and could conceivably form the foundation of a reliable bullpen next year.

A 14th-round pick in the 2014 draft, Justin Anderson was presumably not even on the Angels’ radar a year ago. As a starter, he posted forgettable numbers in his first few minor-league seasons, and a 2017 move to the bullpen yielded similar results. Last winter, though, Anderson re-worked his delivery to add deception to his pitches and improve his control.

He then parlayed the changes into a dominant Spring Training, six scoreless minor-league outings to open the 2018 season, and ultimately his first call to the majors. In 55 1/3 innings with the Angels this year, he posted an above-average 27.8% strikeout rate, which helped him earn a respectable 4.07 ERA and 3.83 FIP.

With a four-seam fastball that averages over 97 mph, Anderson is one of the hardest-throwing pitchers in baseball. Despite the high velocity, though, his fastball is actually not his go-to pitch—it’s his slider, which he throws 55% of the time.

The rationale for this is quite simple: His fastball is effective, but his slider is almost unhittable. Anderson’s breaking ball averaged about 86 mph, and, although he did not demonstrate spectacular command of the pitch, it induced a whiff on 53.04% of opponent swings this year, the 12th-highest rate among relievers who throw the pitch. Opposing batters also only managed a .147 expected batting average and a measly three extra-base hits against Anderson’s breaking ball.

While not on the level of his slider, Anderson’s opposition did not have a ton of success against his fastball, either, collecting only a .295 slugging percentage against the pitch. So, in his rookie season, Anderson showed off two difficult-to-hit pitches; he did not get hit particularly hard (31.8% hard-hit rate, where 35.3% is average); he only allowed a handful of extra-base hits; and he induced an above-average amount of ground balls (50.8%).

All signs point to a dominant reliever—except one: Anderson simply did not throw enough strikes. He owned a higher walk rate than every other qualified relief pitcher (16.6%). If he can remedy his control issues, however, Anderson can go from being a solid reliever to the late-inning weapon that his repertoire suggests he can be. The proof? In 27 outings (28 innings) in which he did not walk a batter this year, he permitted one run.

Over the summer, the Angels acquired Ty Buttrey from the Red Sox in exchange for Ian Kinsler. Buttrey was a fourth-round pick in 2012, and he was originally a starting pitcher. He moved to the bullpen on a full-time basis with Boston’s Double-A affiliate in 2017, though, and saw his strikeout numbers sky rocket.

He carried that success into 2018, and, at the time of the trade, he ranked fifth in Triple-A strikeout rate (34.6%). When the Angels called him up to make his major-league debut in August, he performed similarly.

Across 16 1/3 innings, Buttrey sported a 3.31 ERA while punching out 20 batters (28.6%) and walking only five (7.1%). Additionally, he owned an outstanding 56.8% ground ball rate, and he was adept at inducing soft contact, holding batters to a mere 84.1-mph average exit velocity, which put him in the 97th percentile of pitchers who had at least 40 of their pitches put in play this year.

Like Anderson, Buttrey has a big fastball (95.9-mph average velocity) and a swing-and-miss slider (55.9% whiff rate), though he leans on his fastball much more (58% of the time) and his slider has more downward break, less horizontal movement, and less velocity (82.1-mph average velocity). Buttrey also supplements those two pitches with an 86-mph changeup that generated a whiff on 30.4% of opponents’ swings this season.

The usual small-sample caveat applies here, but what Buttrey did in his short time with the Angels in 2018 was definitely encouraging, and, even if he is not truly a 1.63-FIP pitcher like he was this year, the 25-year-old looks like he will be a valuable member of the team’s bullpen moving forward, as long as the knee injury he dealt with this year does not have any lasting effects.

Change(up) You Can Believe in

Of all of the unexpected performances in the Angels’ bullpen over the last two seasons, perhaps none were more surprising than Taylor Cole‘s. The Angels signed Cole, a 2011 draft pick who had all of one major-league inning under his belt at the time, to a minor-league contract near the beginning of this year’s Spring Training.

He went on to punch out 26.8% of his batters in Triple-A and make his Angels debut in July. In 36 frames in the majors this year, Cole posted a 2.75 ERA, a 28.9% strikeout rate, and an 8.9% walk rate, all better than the average reliever. Notably, Cole, who spent most of his minor-league career as a starter, averaged two innings per outing, a valuable skill in a game littered with one-inning relief pitchers.

Interestingly, all three of the 29-year-old’s pitches—four-seam fastball, slider, and changeup—are thrown between 86.4 and 92.9 mph. All three also produced at least 45.5% grounders this year. That includes his four-seamer, which oddly had the highest ground-ball rate of the trio (54.5%). 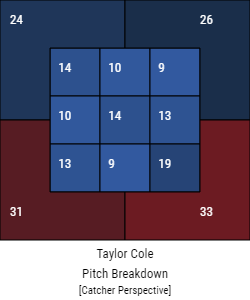 As seen above, Cole focused on locating his four-seamer low and below the strike zone. At a time when many pitchers are trying to elevate fastballs, this strategy might seem peculiar. However, Cole’s four-seamer has movement somewhat similar to that of a two-seamer, or sinker, and is thus best suited as a grounder-inducing, low-in-the-zone pitch.

While his fastball is difficult for opposing batters to get in the air, his secondary pitches are Cole’s most potent. In 2018, he threw his slider 35.7% of the time and allowed a minuscule .111 batting average against it. The opposition whiffed on 38% of its swings against Cole’s slider.

Incredibly, Cole’s changeup, which accounted for about a quarter of his total pitches, was even better. Opposing batters produced just a .198 expected weighted on-base average versus the pitch, missed on almost 45% of their swings at it, and chased it over half the time that it was not even in the strike zone.

His changeup, which averaged nearly 87 mph and reached into the low-90s at times, was understandably his go-to pitch with two strikes, as it was the finishing pitch on almost two-thirds of his punch outs.

Similar to Buttrey, we won’t know if Cole can sustain this performance until he gets a chance to next year, but his 2018 dominance—and his ability to get more than three outs at a time—put him in line to be an important Angels reliever in 2019.

The Best of the Rest

Noe Ramirez led Angels relievers in innings pitched, and only four relief pitchers in baseball tallied more than his 82 1/3 this year. For the first two months of the season, Ramirez was the Angels’ most reliable reliever. At the end of May, he owned a 3.34 ERA and had allowed just one home run in 32 1/3 frames.

But over the final three months of the season, he permitted 14 long balls and finished the year with a 4.37 ERA. It seems that doing a better job of managing Ramirez’s innings to help him maintain his effectiveness will need to be a focus for new manager Brad Ausmus next year.

Cam Bedrosian, who placed third on the team in relief innings pitched, had an uneven season. With his fastball velocity dropping for the second consecutive season, he struck out a career-low 21% of the batters he faced, a number that was 31.5% just two years ago.

He is simply not the same pitcher he once was, but he was still able to produce around average results (3.80 ERA, 4.11 FIP) this year. He is still young, but the diminished velocity will make it difficult for him to return to his 2016 form (1.12 ERA, 2.13 FIP) in the future.

Reliable lefty Jose Alvarez, who has pitched more innings than any other Angels reliever since 2015, had his best season to date in 2018, sporting a 2.71 ERA and a career-best 22.6% strikeout rate and 1.2 WAR in 63 frames. Alvarez has been the unsung hero of the Angels’ bullpen since he joined the team and looks like he will continue to be.

All of the players mentioned above—Anderson, Buttrey, Cole, Ramirez, Parker, Bedrosian, and Alvarez—look like they will return to the Angels’ bullpen next year. Other players such as Hansel Robles, a mid-season acquisition who performed surprisingly well for the Angels, Williams Jerez, who the Angels acquired from the Red Sox along with Buttrey, Keynan Middleton, who had Tommy John surgery early last season, and Austin Brice, who the Angels acquired via a waiver claim last week, will be among the others who will factor into the equation.

GM Billy Eppler said that he wants to add “three or four” more relievers to the mix this offseason, but that the front office will likely continue to bargain hunt in the relief market as it has done since Eppler took over three years ago. As demonstrated most recently by the Colorado Rockies’ spending spree last winter, free-agent relief pitching is notoriously volatile, so this approach is certainly justified.

However, while the Angels have found a few capable relievers in smaller deals recently—like Cole, Robles, and Parker—the team’s overall bullpen performance has been lacking, with the team ranking 15th in the majors in bullpen WAR since 2016. So, neither path is foolproof.

It is unclear exactly how much—or how little—the Angels are willing to spend on relievers, but Eppler’s comments suggest that they are certainly not going to be involved in Craig Kimbrel‘s market. It also seems unlikely that the team would target someone like Jeurys Familia or Adam Ottavino, though perhaps they could add a player of Joe Kelly‘s or Brad Brach‘s ilk.

And they could always look to the trade market for a pitcher such as the Padres’ Kirby Yates or the Giants’ Tony Watson. More than anything, however, it seems that the Angels will be relying on waiver claims, minor-league signings, and low-profile trades.

While the Angels’ bullpen was far from dominant in 2018, they did discover a few relievers who could help form a reliable late-game unit next year. The team still needs to supplement that group, though, and that will be key to putting together a dependable bullpen in 2019.

This is one part of Angels Avenue’s “2018 Angels in Review” series. Find the links to every other part below.

The Catchers | The Infielders |The Outfielders | The Starting Pitchers